Traditionally, all the vegetables in this recipe are fried when making this dish, however it is healthier to broil them this way and it tastes almost the same. Especially, after you add the garlic, parsley and lemon, it is very difficult to distinguish whether the veggies are fried of broiled. 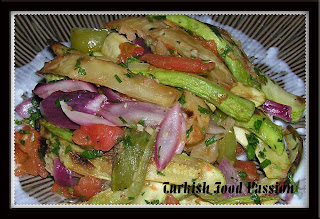