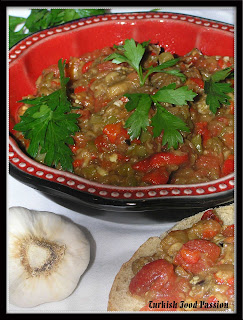 The main ingredient of this dish is eggplant. Eggplant is a purple and fleshy vegetable that was widely used in the cuisine of the Ottoman Empire. To this day, eggplant is one of the major vegetables used in Turkish cuisine, especially in the summer months. Eggplant is mainly used in the following Turkish dishes and appetizers: İmam Bayıldı, Karnıyarık, Babagannuc, Hünkar Beğendi, Dolma and etc. Creating a main dish out of this vegetable alone is possible in so many different ways. Eggplant is perfect for vegetarians as it can be cooked without meat in so many ways. In Turkey, we use small to medium sized eggplants, however here in the States you may only be able to find the large, fat eggplants which are not as tasty. I am lucky to live in Houston where I have absolutely no trouble finding the right sized eggplants as well as other hard to find ingredients. When I lived in the Northeast and the Midwest, it was more difficult to find many ingredients used in Turkish cooking including the right sized eggplants! Also, nowadays stores have green and white eggplants available which I am not very familiar with and have not tried them yet.

This particular dish (Babagannuc) can be made in various ways in different parts of Turkey and the Middle East. In other Middle Eastern countries and in some parts of Turkey, tahini(paste of ground sesame seeds) is added to the Babagannuc. I grew up with this particular recipe (without tahini) and I just love it! This dish will have your taste buds dancing.

Heat your oven broiler. Wash the vegetables and dry them. Poke 3-4 small holes in the eggplants with a knife, so that when they are in the broiler, they do not explode. Arrange the vegetables in a large tray and place under the broiler. Broil the veggies until they are thoroughly cooked. Remove from the broiler and cool. Once the vegetables are cooled, peel and dice and place in a large bowl. There will be some juices from the vegetables in the tray that was in the broiler. I always add it back to the dish since I do not want to throw away all those vitamins and good taste! Chop the crushed garlic and add to the newly chopped vegetables. Sprinkle some salt. Add olive oil and the molasses or lemon juice. Mix well and adjust the salt based on your taste. Garnish with flat leaf parsley. Enjoy as an appetizer or light lunch with any kind of bread.

Note: When selecting the eggplants, do not purchase the huge oversized eggplants. Their seeds are way too large and not as tasty. I prefer to use the smaller eggplants which are much fresher and tastier. Originally, this recipe is done with green peppers, but I made a change this time and added mostly red bell pepper. You may do either one. Usually, lemon juice is used and if you like to try new things, you may want to try it with pomegranate molasses which can be found in Middle Eastern stores.