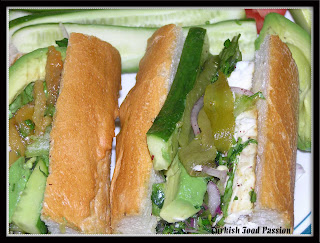 These sandwiches are perfect for a quick, week night dinner after work. Preparation takes less than 30 minutes. You may substitute the bread based on your preference.

In a large Pyrex dish, place the fillets of fish. Sprinkle salt and pepper on both sides of the fish. Drizzle the olive oil and squeeze the lime on both sides. Broil each side for 4-5 minutes.

While the fish is cooking, cut the baguette in 3 equal pieces one of which will not be used since we will make only two sandwiches. Cut the middle of the bread pieces lengthwise without detaching the back. Set aside.

Now, it’s time to prepare the onion mixture. Slice the onion thinly. Add the sumac, parsley and a pinch of salt to the onions. Set aside.

Open up the bread and spread mayo on both sides of the bread. On the bottom part of the bread, add the fish; one fillet to each piece. You will need to cut the fish lengthwise since the baguette is thin. I use French baguette since it tastes very similar to Turkish bread. Add the cleaned and peeled peppers; one pepper to each sandwich. Add the onions, sliced avocados and cucumbers and the lettuce to the sandwiches. Cut in half and serve with sliced cucumbers and tomatoes sprinkled with salt.