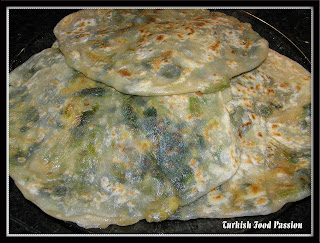 Another type of borek that is unique to Iskenderun/Hatay region is the Spinach Borek on a convex griddle. This version (with spinach) is more widespread in this region. However, nowadays potato, zucchini and meat versions are frequently prepared on sac (convex griddle). To reiterate, even though Turkey is a small country compared to the United States, Turkish food is very heterogeneous. There are so many foods that are unique to only one city or one region. For instance, some cities in Hatay province may not recognize this borek because of its specialty specifically for one small area. Common Turkish cuisine may be prepared and consumed all over Turkey, but sometimes with different versions.

I have made Patatesli Sac Böreği (Borek with Potatoes) previously which was posted on my blog. This recipe is almost the same. I used wheat flour for the potato borek, here I am using regular white flour. Of course the fillings are different too, but the process is the same. Since I do not have a convex griddle, I used a regular non-stick pan.

It may look very time consuming to make these boreks, but believe me it does not take much time to prepare the borek, especially if you prepare the filling the day before. The day you cook the boreks, all you have to do is prepare the dough. If you have a stand mixer, that will take you less than 4 minutes. The only disadvantage is that you have to constantly watch the boreks while cooking so that they do not burn and you do not set your fire alarm.

I am proud to say that both the spinach and the green onions were from our local farmer’s market. They were so fresh. I actually took the previous recipe of 'Spinach Saute' and spiced it up a little bit before I used it as a filling for these boreks.

Here is the recipe with illustrations. 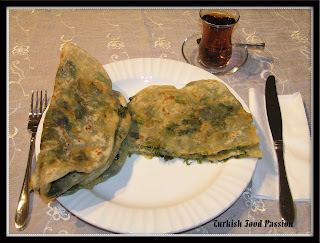 For Drizzling During Cooking:

Add the spinach to the onions. Add the rest of the ingredients for the filling and sauté for 5-6 minutes. Make sure the salt and pepper are distributed evenly in the spinach. 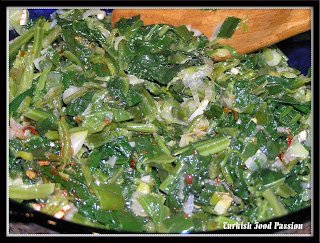 If you are using a mixer, place the flour and the salt in the bowl of the mixer. Attach the dough hook to the beater shaft which comes with your mixer. Start with the lowest speed and start pouring water gradually from the pouring chute. Increase the speed to 2 and then to 4 and mix for about 2-3 minutes until the dough is soft and sticky. Do not forget to add the 1 ¾ cup of water slowly to the dough. The dough will stick to your hands when it is finished (in about 2-3 minutes) but that is okay. Cover the bowl that has dough in it with plastic wrap and let it sit for about 20 minutes.

If you are kneading with your hands, place the flour and salt in a large shallow bowl. Keep a bowl of water handy since you will be dipping your hands in the water quite often. Add some water to the flour to start the dough making process. Keep adding water slowly and start kneading. Keep kneading and keep dipping your hands in the water while kneading. Continue kneading until the dough becomes soft. Place in a bowl and let it sit for 20 minutes.

Heat a large non-stick pan. Keep the 1/3 cup olive oil handy in a bowl with a small spoon. Take a piece of dough in the size of your fist and make ball. 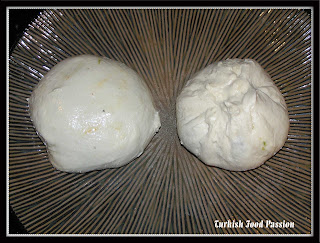 Add a little olive oil to the ball and with your hand flatten the dough a little.

Keep the dough in your left hand and place a spoonful stuffing inside. 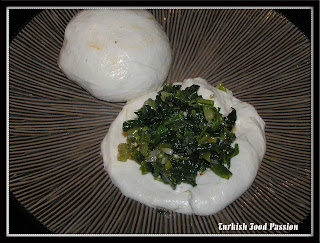 Close the stuffing with the dough by pulling the dough from each side and joining at the center.

Add a little more olive oil to the ball (this is left to your judgment) and smoothen the ball with your hands.

Drizzle some olive oil in the heated non-stick pan. Place the stuffed ball at the center of the non-stick pan and start pressing with your fingers from the center to the outer side of the ball until you have a large disk of dough with the stuffing inside. 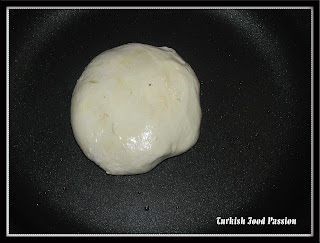 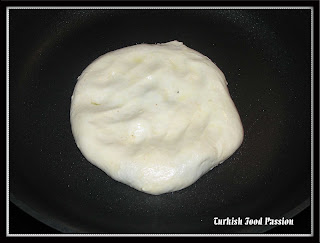 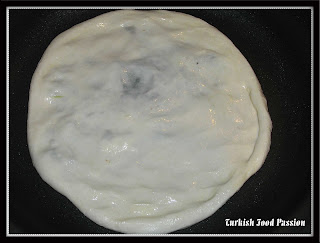 This will allow the stuffing inside the dough ball to be distributed evenly on every side of the dough disk. You will have some tears and broken dough here and there but do not worry that happens when you first try this.

Cook each side until the color turns golden brown. You may keep turning back and forth until you reach the desired color. 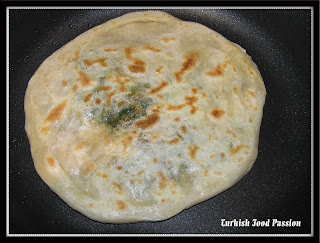 Enjoy with Turkish tea as an afternoon snack or with yogurt and any kind of salad for a lunch or dinner.