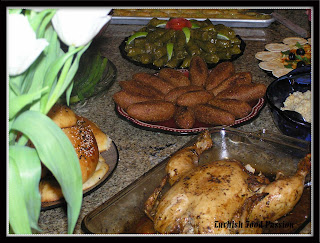 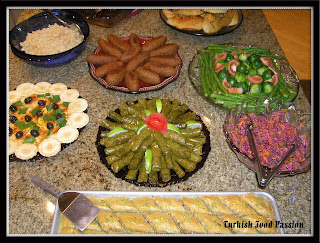 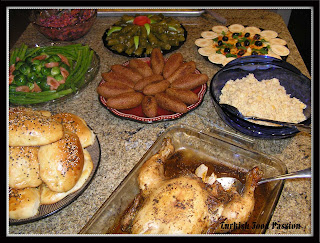 During a cooking get together with friends a while back, we prepared various dishes. I could not resist publishing a few pictures of these foods. Usually, I do not get a chance to take pictures of the food when I have company, but since this was a cooking together activity, many pictures were taken. Here are a few.

I will start explaining the dishes made during this feast. I will use the 3rd picture as a reference. However, the 2nd picture is taken from the opposite side of the 3rd picture.

The ‘Roasted Chicken’ was rubbed with various dry spices, olive oil and lemon juice before it was roasted. I did not write down the recipe that day as I just wanted to just enjoy cooking. Sometimes I feel like cooking something without measuring. In that case, I do not publish the recipes until I make them with measurements.

To the left of the chicken is ‘Poğaça’ which is a savory pastry filled with white cheese (similar to feta) and parsley. These poğaças were made with yeast rather than baking powder. Usually there are two options in choosing the raising agent for poğaças. The ones with yeast turn out very soft and the ones with baking powder are a little firmer. Both taste great, but I prefer the soft ones. I have made these a few times and have not written the recipe yet, but it will be coming sometime.

Right above the poğaças is a ‘Steamed Asparagus and Brussels Sprout Salad’ dressed with salt, olive oil and lemon (very simple ingredients).

Next to the asparagus and brussels sprouts is İçli Köfte which is bulgur shells stuffed with meat and onion mixture. I have posted a recipe for içli köfte before. You have two choices when making the shell. You may add boiled and pureed potatoes to the bulgur or ground meat (this can be done in a food processor or grinding the ground beef three times in a meat grinder). These particular ones are made with grinding the meat three times in a meat grinder to make the shell. They turned out pretty decent.

Everyone had a shot at opening the shells. Both Selma and Zeynep actually did a good job even though it was their first time, except I think Selim created some interesting shapes to the shells. We knew which ones he made! I don’t even think my husband tried; he probably would have done worse! Opening a hole in the shells needs some experience and talent and I am not there yet either. The shells are supposed to be thin, however mine turn out to be thicker than I would like them to be. But I have made these only 3-4 times so far. I need to practice! They tasted similar to what my mother makes, so I was pleased. Once I manage to make the shells a little thinner, I’ll be happier, as this is simply my favorite food. There is a machine for it, but bringing it from home in my luggage will be very risky since I have seen how luggage is carelessly thrown in airports! It will be too heavy to carry on a carry on.

Next to the içli köfte is ‘Bulgur Pilaf with Chickpeas’ that is prepared with chicken broth instead of water.

Straight above the pilaf is 'Hummus’ which was made by my husband. A recipe for it will be coming next.

To the left of the hummus there is ‘Yalancı Dolma’ or ‘Zeytinyağlı Yaprak Sarması’ which was made by Zeynep. The recipe is being posted in the bottom of this post.

To the left of the ‘Zeytinyağlı Yaprak Sarması’ is a ‘Red Cabbage Salad’ which is made with lemon and olive oil dressing. This is a very tasty salad. 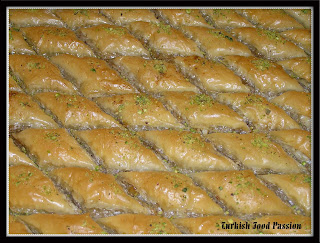 I had to reserve a separate picture for the ‘Baklava’ that we made. This is my favorite dessert. I enjoy making it and sharing it with others. A while ago, we made it with a friend so she could take it to her work for an occasion. She could not stop telling me how much praise it got and how she still hears about it. Did I mention that last year, in the company where I work, there was a dessert competition and my baklava won? I am humbled to receive so many compliments above and beyond usual about this baklava. However, the last time I made baklava, which was last week it did not turn out great for two reasons. For one, the market where I usually shop had run out of my favorite phyllo dough, so I had to choose another brand that I had not tried before. These phyllo sheets were thicker than usual and did not work out as I wanted it to be. Another thing was that, I played with the syrup a little bit. It still was not bad, but was not my usual. 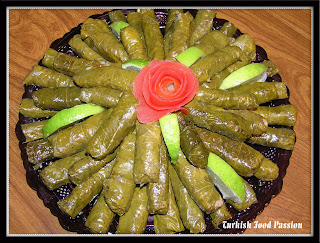 Now, it’s time to talk about today’s recipe. We prepared all the meal together except the filling for the rolled grape leaves which was done the night before by Zeynep. She brought the filling ready to be rolled during our cooking adventure. We used the grape leaves my mother had given me last summer that she had collected from our garden in the mountains. In fact, I think I even helped her picking them. She stores them in bottles with some water (I don’t know the process she uses to store them really). This is a common way of preserving grape leaves back home.
Collaboratively, the grape leaves were rolled and cooked. The decoration was done by Zeynep and her sister Selma who claims does not have any culinary talents. I was astonished when I saw the rose she created with the tomato peel that was placed on top of the rolled grape leaves. That was something I learned from her as I need to advance my decoration skills. The plate looked so pretty and appealing with the arrangement and contrast of colors; one would feel discouraged to eat them so that the decoration would not be destroyed. As you can assume, we did eat them. In fact, this was the first dish that was cooked, so we nibbled on the grape leaves while preparing the rest of the menu.
Again, this is another versatile Turkish dish as you will already see two other different stuffing posted in my blog for grape leaves and dolmas. Check out Stuffed Mixed Vegetables (Karışık Dolma), Stuffed Grape Leaves with Olive Oil (Zeytinyağlı Yaprak Sarması) and Stuffed Peppers with Chicken (Tavuklu Biber Dolması) for other types of fillings.
The stuffing for the grape leaves and dolmas varies from region to region in Turkey. Different areas prepare the filling differently based on their local food culture.

This dish is also called ‘Yalancı Dolma’ which in this case means ‘Fake Dolma’. The word ‘Yalancı’ in Turkish means ‘Liar’, but in this case it refers to fake. Instead of meat, rice is used for stuffing the grape leaves. The word ‘Dolma’ comes from the Turkish word 'doldurmak', which means, ‘to fill’.
This is made with olive oil and served cold or at room temperature. Although, for me I make everything with olive oil, so I serve them warm or cold. Both ways taste very good. Generally, I serve them warm as I am used to the way I used to eat them when I was a kid. It is funny how habits from a young age continue for so long. However you choose to eat them, sarmas or dolmas are really good.
This dish was very common in the Ottoman Empire kitchen. Most regions surrounding Turkey also make different types of dolmas. From Eastern Europe to the Middle East, to Azerbaijan, this is a popular dish along with eggplant, zucchini, tomato and other types of dolmas.
Thank you Zeynep for sharing your delicious recipe.

Heat olive oil and sauté onions until onions are transparent. Add pine nuts and stir for 3-4 minutes. Add the water and let it boil. When the water boils, add the rice and salt. Mix and cook covered on medium low heat for about 15-20 minutes or until the rice is soft. Turn heat off and add currants, cinnamon, mint and parsley and cover. Let it sit for 10 minutes. Uncover and mix stuffing. Let it cool.

If you are using a pickled grape leaves, remove from the jar and run under cold water and squeeze to let all the water out. Take one grape leaf and place on a cutting board or well cleaned counter. Follow the rolling process on my previous post for ‘Stuffed Grape Leaves with Olive Oil’.

Remove the stem. Place some stuffing on the leaf. Start rolling the grape leaf by first making one fold forward and then folding both sides in. Keep rolling forward until the leaf is completely rolled. Place neatly in a pot.

Pour ½ lemon juice on top. Add water. Place 3-4 small plates on the leaves to put weight on them so they do not open during the cooking process. Cover and cook on medium heat until water boils. Reduce the heat once the water boils and start cooking on low for 45 minutes. Make sure the water does not dry out before cooking. I always take one grape leaf and taste it before I decide if the rice inside has cooked or not. Enjoy at room temperature.