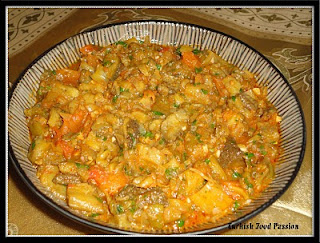 Today, I almost published a delightful, new cake recipe that I came up with last week. However, the pictures of the cake could have turned out a little better, so I will have to make this cake again sometime soon since there is no more cake now to photograph again. Instead, I will leave you with a common Turkish appetizer; eggplant salad. Since the summer has started to show its signs in most places, the markets are now full of seasonal vegetables, such as eggplant which is widely employed in Turkish cooking.

Puncture the eggplants and peppers with a knife. Place in a baking tray along with the tomatoes and broil until both sides of each vegetable are soft.
Remove and cool. Peel eggplant, tomatoes and peppers and dice after removing the seeds from the peppers.
Heat olive oil in a medium pot. Add the shallots and garlic until onions are transparent. Add the diced eggplants, green peppers and tomatoes. Stir and add salt, red pepper flakes and ground black pepper and cook on low for about 30 minutes. Just before removing from heat, add the chopped parsley and stir. Cool and refrigerate for at least five hours before serving. Enjoy with a warm piece of bread as an appetizer, salad or side dish.