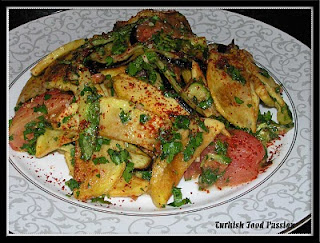 The summer is almost here and what is better than a meal with summer vegetables? This summer vegetable salad which is made frequently in our household in Turkey is filling and very tasty. Since this salad is made with fried vegetables, I rarely make it, but when I do, I prefer using olive oil. Sometimes, I broil the vegetables instead of frying however it tastes best when the veggies are fried. The only missing vegetable in this dish is green, long peppers which adds a slight hotness to the salad. Other vegetables can also be used such as cauliflower and okra. Enjoy with your choice of veggies. 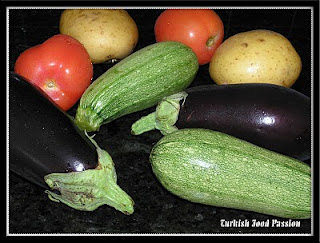 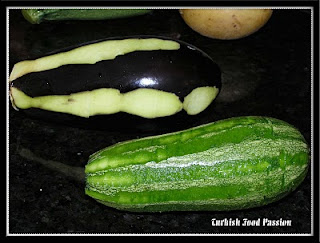 Cut the zucchinis lengthwise in half. Place each half flat bottom side down on a cutting board and slice. 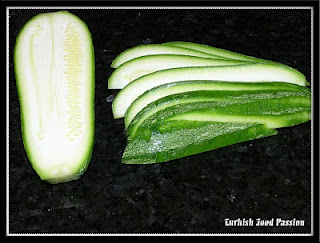 Put the sliced zucchinis in a small bowl.

Cut the eggplants in half and follow the same process of slicing as the zucchinis. 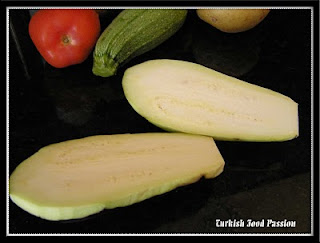 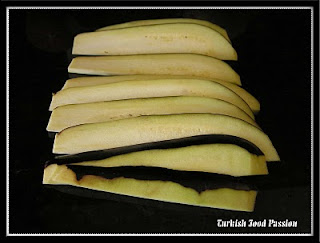 Place in a separate bowl with cold water and a dash of salt to prevent discoloration.

Peel the potatoes and cut in half similar to the zucchinis and eggplants. 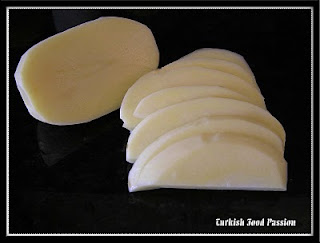 Place in a separate bowl with cold water in order to prevent them from turning brown.

Cut the tomatoes in quarters lengthwise and set aside.
Heat olive oil on medium heat in a large non-stick pan. In the mean time, prepare a large bowl with 5-6 folds of paper towel in it to absorb the oil.
Drain the eggplants and salt them. Add a batch of the eggplants to the pan. Turn over once they become soft or start to get a hint of brownish color. When they are slightly brownish on both sides, remove from pan and place on the bowl with paper towels.
Next, drain and salt the potatoes to the frying pan. Fry until the bottom side of the slices get a light brownish color. Turn over until the other sides of the potato take a golden color. Remove and add on top of the fried eggplants in the bowl.
Next, sprinkle salt to the zucchinis and fry until the zucchinis are soft and take a slight golden color. Add in the bowl with the potatoes and eggplants.
Place the tomato slices in the remaining oil and fry until the skin of the tomatoes separate from the flesh. Place in the bowl with the other vegetables.
Remove the paper towel carefully from the bowl. Sprinkle with ground red pepper. Add the chopped parsley and garlic. Squeeze the lemon and mix the ingredients in the bowl until the lemon, parsley, garlic and red pepper are integrated with the vegetables. Adjust salt according to taste. Serve with flat bread and plain, cold yogurt.