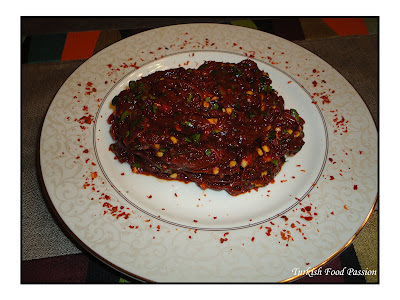 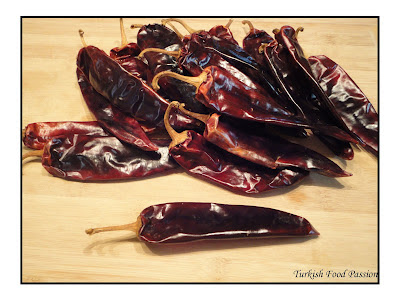 This recipe has been waiting to be published for a few months now and finally I got the chance to publish it. Due to my busy work schedule it has been very difficult to keep up with my blog in the past year or so but I will try to keep it going as long as I can. I do have many more Turkish recipes and can’t wait to share them with my readers.

This recipe was not very labor intensive and tastes delicious so I thought it is perfect for another post. When my mother last visited me, she made a dried red pepper salad for us. She used sliced dried peppers which she had brought from Turkey that had thin skin. I very much enjoyed it and wanted to try it myself. Since the dried red peppers I purchased had tough skin, I decided to remove the flesh from the skin before preparing the salad. Although the texture was different, the taste was very close to my mother’s salad.

This can be enjoyed as a side with a variety of entrees. A cup of plain yogurt also would go well with it. Enjoy.


Boil half pot of water. Soak the dried peppers covered for 30 minutes in the hot water. Run through cool water and drain. With a sharp knife, slit each pepper lengthwise on a cutting board. Remove and discard the seeds. Gently, remove the flesh of the pepper from the skin by running the knife from the top portion of the pepper towards the end. The flesh of the pepper will most likely stick to the knife, so remove carefully and place in a bowl. Repeat this until all the peppers are cleaned and removed from the skin.

If the skin of the peppers is thin you may slice the peppers instead of going through the trouble of removing the flesh from the skin. If the skin is tough, it is best to remove and only use the flesh.

Add the garlic, parsley, lemon juice, olive oil and salt to the bowl with the peppers. Mix well and serve at room temperature.

Note: This salad can be served as a paste in sandwiches. It goes especially well with chicken sandwiches.