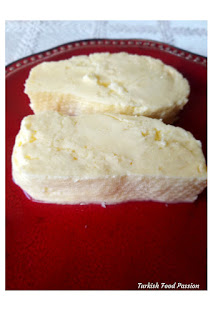 This recipe was prepared over a year ago and I had an issue with the program I was using for the pictures after changing computers. I never got a chance to get back to what I was using before, so I decided to publish these not so great pictures as they are instead of waiting any longer. I had a few more pictures illustrating the the process, but it may take another year for me to work on those! I think it's better to publish the recipe before I forget about all together!

White cheese is a very important staple in Turkish cuisine. No Turkish breakfast is complete without white cheese. It is eaten widely through out Turkey whether it is plain for breakfast with bread or as a filling for various types of boreks and pastries. It can also be used in different types of dishes such as Mediterranean salads, zucchini fritters and etc.

Every time I visit a Turkish store, I buy several containers of Turkish white cheese for breakfast and boreks. It can be confused with feta which is very similar but not the same. I used to think they were the same. They keep for a long time so it is convenient in that way.

Th last time my mother visited me, she made white cheese for us and I truly didn’t believe it would be similar to the store bought one. To my surprise, it was pretty close! I loved the taste and the texture. After she left, I made it several times and it turned out pretty well. Now, I rarely buy Turkish cheese anymore.

I have not used the regular store bought milk to make this yet, but I would think it should turn out the same. I use either the raw or the low pasteurized grass fed Jersey cow whole milk that I buy from my local farmer. It makes a difference in the taste for sure but store bought whole milk should be fine too.

Enjoy as stuffing for pastries, as topping on toast or just on Mediterranean salad! 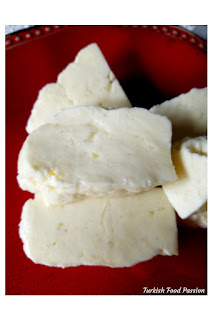 As soon as it boils, pour in the yogurt and let boil for a few minutes until it starts to get a thick curd.

Turn it off and let it cool for 30 minutes to one hour.

Place the cheese cloth with the curd in a colander and put heavy objects on it to press it and squeeze all the liquid out.

Leave it for about four hours until all liquid has drained out.

In the mean time, boil water. After it boils, add the salt and mix until the salt has melted.
Let it cool completely.

Open the cheese cloth and cut it in squares or rectangles.

Place the salty water in a glass jar. Put in the cheese pieces and close the jar. 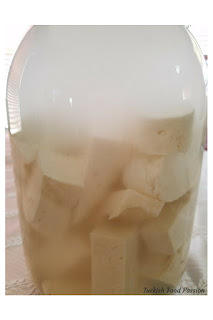 Note: Do not keep this more than 4 weeks as it will get sour and not edible. Also, do not store leftover cheese in the refrigerator without the salty water. It will go bad immediately!