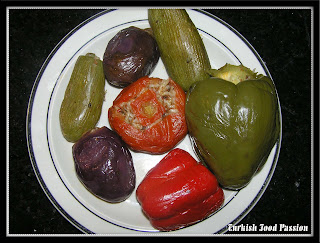 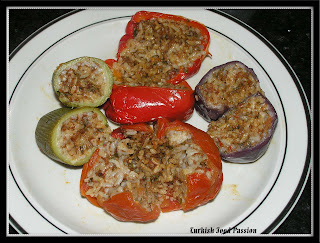 Dolma is one of the most popular dishes in the current modern Turkey dating back to the Turkish Empire (Ottoman Empire) era. It is also a worldwide well-known dish. Various regions in Turkey make dolma in different ways such as using nuts and raisins in the dolma stuffing. Generally, when dolmas are made with olive oil and without meat, it is eaten cold and when dolmas are made using butter or vegetable oil and meat, it is served warm. Back home in my region, dolmas are always made with meat using butter. Since I do not use butter in my cooking (other than baking), I am making my mom’s dolmas with olive oil and a few other slight additions such as using pomegranate molasses as well as lemon juice. Usually, lemon juice is used.

The word ‘dolma’ comes from the Turkish word ‘dolmak’ which means ‘to be filled’ or ‘to be stuffed’. The vegetables used for dolmas are almost unlimited. One can use any vegetable that can be stuffed. Generally, the following vegetables are often used in Turkish dolmas: eggplants, zucchinis, green or red bell peppers, tomatoes and even onions.
Below is the recipe to this famous dish: 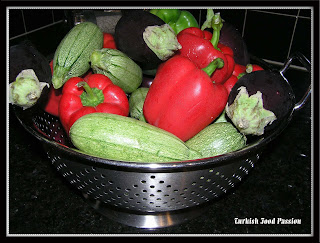 For Cooking the Dolmas:

Fill a large pot with water and add salt & the juice of one lemon. This will be used to keep the eggplants from turning brown and to give them a salty lemony taste to the vegetables after being carved.

To carve an eggplant without creating a hole can be challenging. There is a tool that is especially used to carve an eggplant or a zucchini in Turkey. I know that they are definitely available here in the States in Middle Eastern stores. That little tool makes carving a lot easier. After washing the vegetables well, remove the stem from the eggplant and cut a 1/2 inch from where the stem was. Do not discard the ½ inch stem as it will be used for covering the stuffing later on. This will allow the carver to have enough room to go inside the eggplant. Stick the carver once and remove. 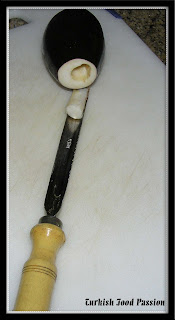 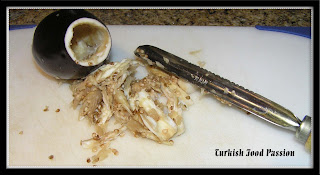 Once the carving is complete, add the eggplant to the salty and sour water. 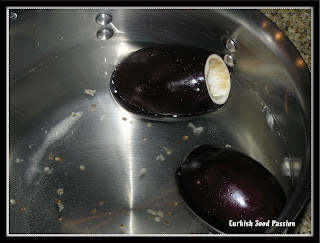 Repeat the same process until all the eggplants are carved. Now, start carving the zucchinis the same exact way. The zucchinis tend to get unwanted holes in them more than eggplants, so be extra careful. Scrape the zucchinis with a knife or with the carver (some carvers have a scraper also) after you carve them. Remove the stems from the peppers and remove any seeds that may be inside them. Repeat the same thing with the tomato. 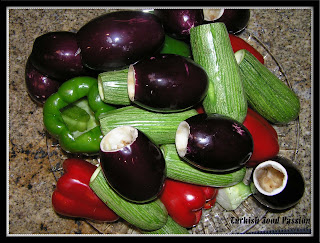 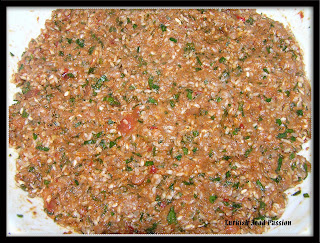 Start filling the vegetables with the stuffing. 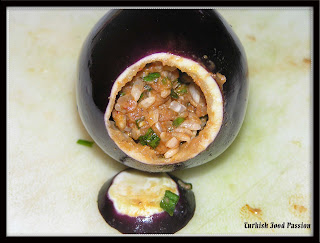 Fill up to the top and leave a ½ inch space on top and cover with the ½ inch piece you cut up before you began the carving process. This will close the vegetable so that the stuffing will stay inside the vegetable rather than swimming around in the pot while cooking. Repeat the same process with all the carved vegetables. Arrange the vegetables in the large pot. Make sure they are not loosely arranged. They need to be as tight as possible so they have no where to move in the pot. 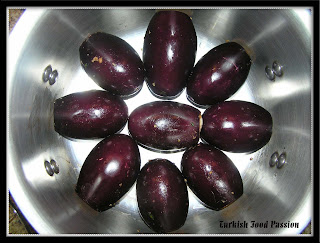 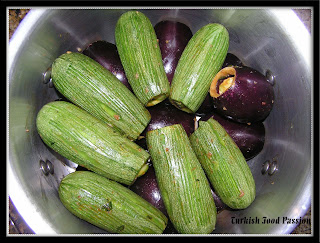 Try not to overfill the pot. If the vegetables do not fit the pot, split them into two pots. Assuming you have one large pot, spread 4 crushed garlic cloves, fresh mint leaves and the lemon juice on top of the arranged stuffed vegetables. 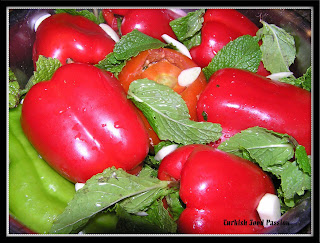 Then pour 1 ½ cup of water and put some weight on the vegetables. There is a special weight tool that is made out clay that is put inside the pot on the vegetables in Turkey. Since that is not available to me, I put in 3-4 small plates to put some weight on the vegetables so that they will not be swimming in the pot. Put on the stove until the water inside starts to boiling and then turn to low heat for 1.5 hours. After turning the heat off, let the pot sit covered for 30 minutes before serving. Serve warm. This dish goes very well with plain yogurt.