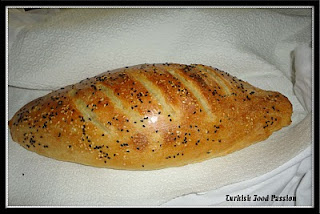 The significance of bread in Turkish meals cannot be overstated. Every Turkish meal includes some sort of bread; either somun loaf, flat, pide or lavaş bread. Most Turkish people living in Turkish cities do not spend time making bread at home due to the numerous bakeries on almost every corner. The smell of bread coming out of these bakeries that make bread twice daily overfill the streets in the morning and in the afternoon. The most prevalent types of bread that can be found in Turkish bakeries are the Turkish somun bread and flat bread. Of course the breads may deviate from city to city in Turkey as every region has its own traditional cuisine. In Turkish villages, women get together and make flat bread (sac ekmeği) on iron griddle lit with wood or lavaş bread which is made in a tandır; a clay oven. 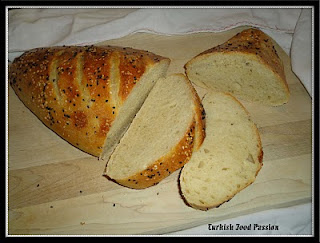 The closest bread to Turkish somun bread is French bread which we (my husband & I and maybe other Turks too) consume in order to satisfy our cravings of Turkish bread while living in the States. I made somun bread once last year to attain a closer taste to what we had in Turkey and it turned out just okay, so I never published the recipe. I kept putting off trying it out again until recently and in the mean time I spent some time studying bread baking. This time I am much happier with the result except one insignificant thing. Instead of cutting a horizontal line on top of the loaf as it is done with Turkish somun bread, I made diagonal cuts and thus could not attain the same Turkish bread look, but the bread tasted so good could not resist publishing it now. When I put my bread in the oven, I realized something was missing and couldn’t figure it out until I got the bread out. It was the look of it. For this reason, I am also sharing my bread picture from last year with the right incision, however with a slightly different recipe. 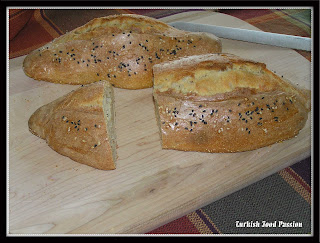 Caveat: I baked my bread on a pizza stone and the pizza stone cracked while the bread was baking. I am guessing it cracked because of the contact between the hot baking stone and the water dripping from the top of the bread to the bottom of the stone while basting. In any case, I did not disturb the baking process until it was finished. You may choose to bake it on a baking tray or cookie sheet.

The bread’s crust turned out crispy just as I had envisioned and the inner part soft. I was very pleased with the result and happy to share it with you.

For Baking and Basting:

Place the water a small bowl. Add yeast, stir and let it sit for 30 minutes.
Sift the flour and salt and place in the stand mixer bowl. Add the water with the dissolved yeast to the mixer bowl and place the mixer speed on stir for about 2 minutes. Run the mixer at speed 2 and gradually increase to speed 4 until the dough is soft and elastic (about 5-7 minutes). The dough can be tested by cutting a small piece and stretching it until it is transparent. If the dough stretches without breaking, then it is ready.

Cover the dough and let it sit for 2 hours in room temperature. The dough will rise. 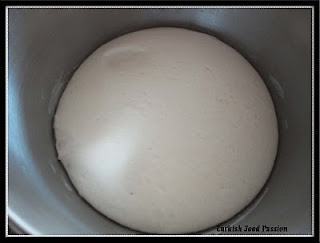 With hands, push the dough down and let it sit 2 ½ hours. 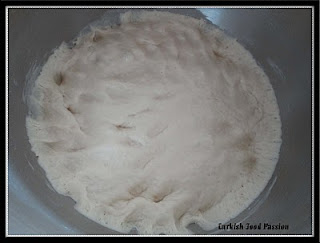 Sprinkle baking sheet/stone with cornmeal. When the dough is ready, place the dough in the baking sheet or stone and give it an oval shape. Sprinkle with sesame seeds. Run a knife horizontally on top of the bread or a few diagonal cuts. 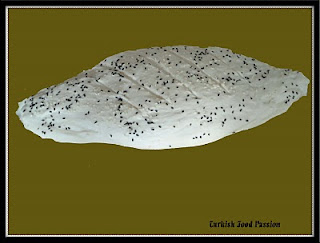 Heat oven at 450 º F and place a small, empty iron pot inside while the oven is heating. When ready, place the baking sheet or baking stone with the bread in the oven and add 2 cups of water in the empty pan in order to generate some steam for the bread baking.

Bake for 30 minutes or until golden brown. While baking, baste with water every 5 minutes. Enjoy warm!