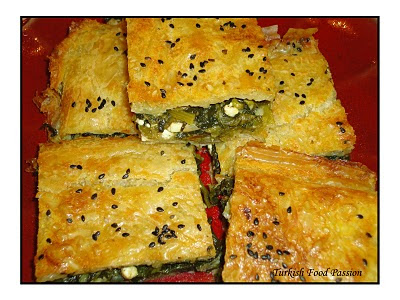 Two years ago, I made a spinach and feta börek and prepared the recipe and all the pictures step by step and never got around to publishing it. Just recently, I made this börek and documented it again. This time, I made a few changes in the recipe and I decided to publish this version instead of the previous one. The taste of this one surpassed the previous one, so I decided to publish this version. 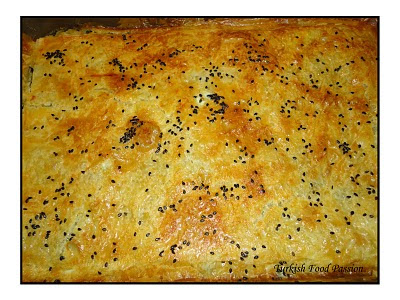 Note: The Phyllo dough sheets can be found in the frozen section of most markets. If the Pyhllo sheets are too big for the tray or Pyrex dish you are using, the phyllo sheets can be folded to reach the size of the baking dish.

Add the spinach to the onions and garlic. Add the rest of the ingredients, except the cheese for the filling and sauté for 5-6 minutes. Make sure the salt, cumin, black and cayenne peppers are distributed evenly in the spinach.

Remove the spinach filling from heat and let it cool. When the filling cools down, add the crumbled feta cheese. If the feta is very salty, no salt is needed for the filling as feta cheese may compensate for the salt.


Putting All Ingredients Together:

In a deep bowl, add the yogurt, olive oil and egg. Mix vigorously until all three ingredients are mixed well.

Using a brush, spread a small amount of the yogurt-olive oil-egg mixture in a large Pyrex dish. This is to prevent the Phyllo sheets from sticking to the Pyrex dish.

Open the Phyllo dough package. Place a damp cloth on top so that the Phyllo sheets do not dry out. These are the same dough sheets that are used for baklava.

Bake at 350º F in the middle rack of the oven for 40 minutes or until golden brown. Let it cool before cutting, otherwise the bottom part of the börek may get soggy.

Serve warm or at room temperature.